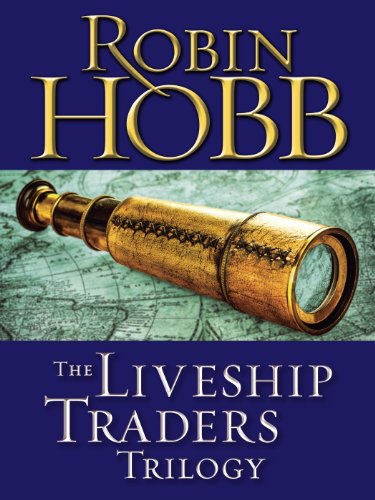 Set in the same sprawling fantasy world as her FitzChivalry Farseer novels, Robin Hobb’s Liveship Traders trilogy unravels the story of a once-thriving city, a glorious and mythic species facing extinction, and the clan whose destiny is intertwined with both. Prepare to be swept away in this breathtaking eBook bundle:

Bingtown is a hub of exotic trade and home to a merchant nobility famed for its liveships—rare vessels carved from wizardwood, which ripens magically into sentient awareness. Now the fortunes of one of Bingtown’s oldest families rest on the newly awakened liveship Vivacia.

For Althea Vestrit, the ship is her rightful legacy. For Althea’s young nephew, wrenched from his religious studies and forced to serve aboard the ship, the Vivacia is a life sentence. But the fate of the ship—and the Vestrits—may ultimately lie in the hands of an outsider: the ruthless buccaneer captain Kennit, who plans to seize power over the Pirate Isles by capturing a liveship and bending it to his will.

Praise for Robin Hobb and the Liveship Traders Trilogy

“Fantasy as it ought to be written . . . Robin Hobb’s books are diamonds in a sea of zircons.”—George R. R. Martin

“A truly extraordinary saga . . . The characterizations are consistently superb, and [Hobb] animates everything with love for and knowledge of the sea.”—Booklist

“A major work of high fantasy, reading like a cross between Tolkien and Patrick O’Brian . . . one of the finest fantasy sagas to bridge the millennium.”—Publishers Weekly

“Rich, complex . . . [Hobb’s] plotting is complex but tightly controlled, and her descriptive powers match her excellent visual imagination. But her chief virtue is that she delineates character extremely well.”—Interzone